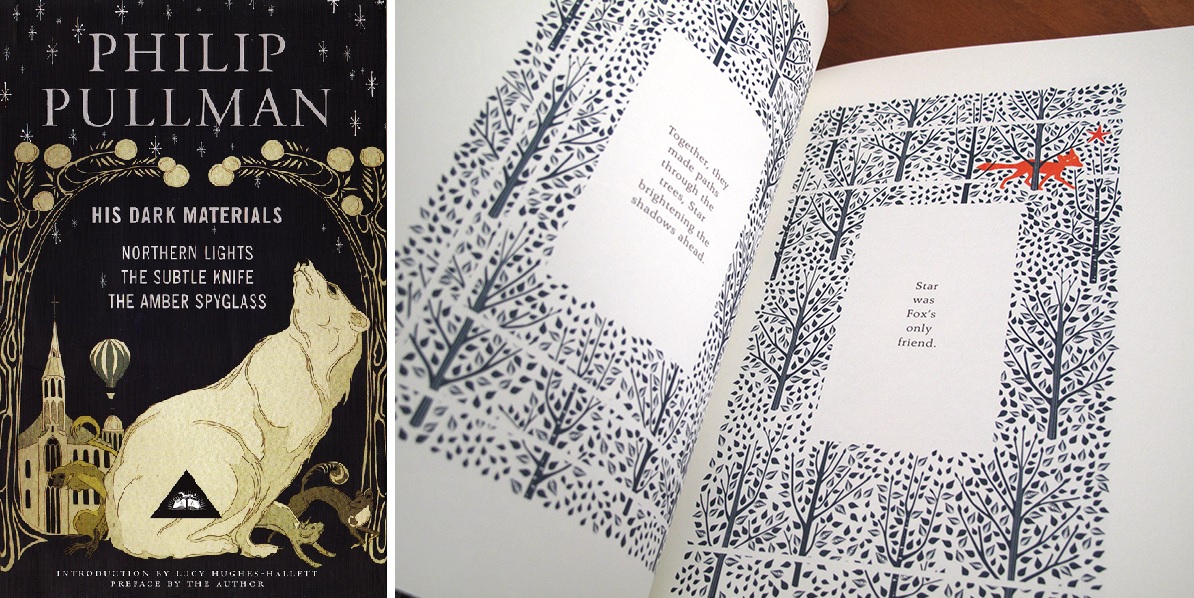 I recently read a Slate article subtitled ‘Read whatever you want.  But you should be embarrassed when what you’re reading was written for children.’ Though the article focuses predominantly on YA literature, it shows a clear snobbishness for books that aren’t aimed specifically at adults. But when we look at the success of, for example, Harry Potter, it becomes clear that there must be something of value in children’s literature for adults. So this poses the question, is children’s literature exclusively for children?

I have never been embarrassed to admit that some of my favourite books fall into the children’s literature category. One of my prized possessions is my copy of Philip Pullman’s ‘His Dark Materials’ (the beautiful 3 in 1 edition photographed top left). These books can equally be enjoyed by children and adults alike, though perhaps, I’d be willing to argue, more so by adults. Children will connect easily with the protagonist, Lyra – a stubborn, quick witted young girl who goes on an epic adventure to save her friend but becomes involved in a much greater adventure to save the world (or worlds). However, there is a definite level of depth and complexity that appeals to adults – the novels critically engage with religion, with much of the series’ deeper meaning lying in the evocation of biblical stories, in which Lyra plays the role of the second Eve. For a children’s series, the books are surprisingly dark, featuring the sacrificial death of a child at the end of The Northern Lights and the depiction of a world devoid of adults and plagued by Spectres who prey upon adults and, as the book reveals, older children, leaving children in terror of the day they grow old enough to become a victim. Unlike typical children’s stories the novel ends far from happy when *SPOILER ALERT* Lyra and Will, very much in love, are forced to accept the fact that they will never see each other again once they return to their own worlds.

There are a huge number of children’s novels that arguably can be enjoyed by both adults and children, such as Harry Potter, whose final books are decidedly darker and more complex than its earlier books, perhaps growing and maturing alongside their original audience. Then there’s Neil Gaiman’s wonderfully creepy Coraline, and William Nicholson’s ‘Wind on Fire’ series, one of the earliest children’s fantasy/dystopia I remember reading. Then we have YA fiction, but that’s a whole other argument for another day.

It would seem that children’s literature is on the rise. The recently announced winner of the Costa Book of the Year award was Frances Hardinge’s The Lie Tree, a children’s fantasy novel. This is only the second children’s novel to have won the award, the first being the final book in Philip Pullman’s ‘His Dark Materials’, The Amber Spyglass. In a recent BBC article Belinda Rasmussen, publisher at Macmillan Children’s Books suggests that Hardinge’s work, like Pullman’s ‘are adult books, but the main character happens to be a child of 14’, while Hardinge herself suggests that her success indicates ‘a move away from considering children’s literature to be a little bit more lightweight’. Interestingly, the 2015 winner of the Waterstones Book of the Year was also awarded to a children’s book, The Fox and The Star. This book, photographed top right, focuses as much on its striking minimalist illustration as it does on storytelling and can be enjoyed by children and adults alike.

It will be interesting to see if this trend continues in the coming years or if children’s literature will return to being overlooked in favour of more ‘literary’ novels.

Let me know what you think – do you think adults should be embarrassed to read children’s literature? Do you have any favourite children’s novels?

Hi, I'm Katie and I'm an English and Media graduate living in Glasgow! Here at That Novel Feeling I explore books, poetry and issues concerning the world of literature in general. Feel free to get in touch, comment and share!